Awww, thank you Chris Musgrave for the nomination and the, er, homework…  🙂

So here are the nominee instructions:

And the nominees are…in no particular order…

1. Not a Punk Rocker

6. Girl On the Contrary

7. Curve Is The Word

And 7 Things about me:

1. I sing out loud in the car…and in the kitchen…and while I train (good measure of effort) but strangely, not while I shower.

2. I know all the words to the songs in Disney’s A Little Mermaid, Aladdin and Beauty and the Beast.

3. And all the words to the movie Labyrinth (I also used to have the soundtrack on tape)

4. I have a tendency to get overly obsessed with a show, watch every single episode on Netflix and then have weird dreams that I’m in the show.

5. I secretly love mowing the lawn and hate vacuuming.

6. I cry every time I see commercials where the military mom or dad comes home.  The one with the huge dog is bad too.

7. I don’t like sushi.  Well, let me clarify, I’m not a huge fan of sushi.  Once in awhile I’ll have a craving but I’d take Hibatchi chicken over a rainbow roll any day.  (Bad sushi experience).

Hope the rest of your weekend is fantastic!

I keep meaning to share this but I keep forgetting.

So I was reading a blog by a writer (can’t find it now) and she was saying how she’ll use pinterest to inspire herself and keep her going with her stories by “pinning” (this hurts) stuff.  Like actors, scenery and whatever else pinterest lets you do.  (Sidebar – I am not cool enough to be on pinterest, I have looked at pinterest but I’m not cool enough.  Hell FB and this blog is almost too much)

ANYWAY, so I took a note from her arsenal of ideas and googled Jensen Ackles “Images.”  I’ve already admitted that one of my characters is loosely based on how I think he’d be in real life so it’s not that big of a deal to have a web browser tab open with Jensen Ackles images.  But, it’s next to my WordPress tab…and every time I open someone’s blog it’ll open a new tab and when I close the tab I am treated to a lovely montage of shirtless Jensen Ackles photos.  (Don’t judge, he’s totally hot)

And it REALLY makes my day.  And every time it happens I say, I need to post about that!  So now I have.  Um…yeah…what was I saying?  Totally got distracted there. 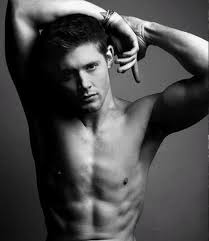 Yesterday I mentioned, in regards to whether or not I’m a good writer, that I have a lot of stories inside me.

To be honest I have 3 that are in various stages of writing.  One of the stories is set for at least 3 “books” worth…and that one hasn’t been worked on in years.  I think partially because it’s a bit overwhelming and my confidence in my writing just isn’t there yet.

The next one is a little close to home, in the romance department.  It’s a chick lit book because when the story came to mind I was reading way too much chick lit and had a huge crush on a guy I sorta worked with while I’ve been in my non-committed long term relationship (too much to explain).  This one I know from front to back story-wise, it’s just been a matter of getting that front to back on paper, er, computer.  Again, has not been worked on in years.

The last and most current was one I started with the high hopes of FINALLY completing NANORIMO (is it even still called that?) last November and while watching way too much Supernatural.  It too is a chick lit book, but unlike Supernatural, there’s no Supernatural just characters loosely based on what I imagine the actors would be in real life…if they weren’t actors.  Don’t judge.  I’m not very far in that one either.

But I have a wonderful friend who loves to read my writing and promising to keep her editing to herself until the projects are finished.  She also diligently harasses me for chapters (not pages).  She’s been bugging me about that latest so last night I found myself with some free time before yoga (which I didn’t make it to but for other reasons) and began working on my story.  And I totally got on a roll.  I sent her the promised couple of chapters and then continued to write another chapter or so.

It was hard to let go but NCBF called with a crisis about his eldest and I was forced to break off the writing to lecture eldest about his not so great recent choices to dabble with criminal activity.  Yes, I know they aren’t mine, but I’ve been helping raise them for 8 years and have been there more than their mother has so I think I’m allowed to assist in the lecturing at this point, but I digress.

It was amazing to actually get the words down.  The more I wrote the more I could see the story unfolding and the more I was able to bring it to life in my brain and then do my best to get it out.  I always worry that either I go into too much detail or not enough.  I mean, I know it’s not necessary to detail out a character’s day but I feel bad if give an abridged version, even when it really has no bearing on the rest of the story.  How do I get over this?  I’m hoping today to get some more words in after work.  Maybe I’ll finish this one and my confidence will increase so I’ll be able to work on the others.  That’s my overall hope.

Happy Tuesday, y’all.  In central Texas we’re shut down again for ice and freezing temperatures.  My car is a car-cicle and Booty camp was cancelled this morning.  Everyone have a great day and stay warm!

It’s all about me!

"I am and always will be the Optimist. The hoper of far flung hopes and the dreamer of impossible dreams."
-Dr. Who (11th)